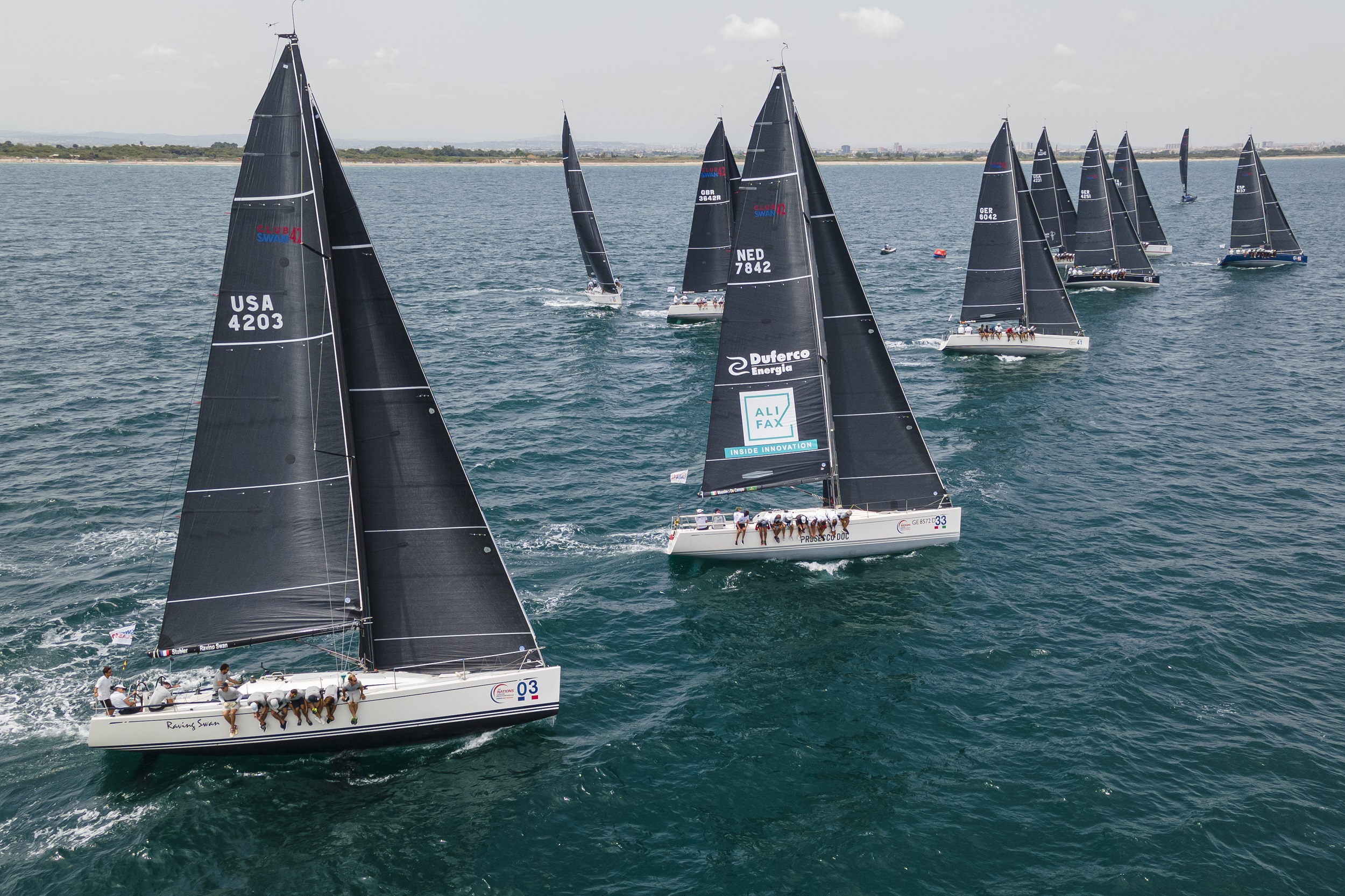 Posted at 09:51h in News by Sara Torrini

The ClubSwan Racing family took to the water today off the historic Spanish port city of Valencia for a final shakedown ahead of the Swan One Design Worlds, one of the highlights of the Mediterranean sailing season.

All 34 of the yachts gathered to compete in the World Championships for three classes – the ClubSwan 36, ClubSwan 42 and ClubSwan 50 – took part in the Practice Race, fine tuning crew work and getting the measure of the competition.

For the nine-strong ClubSwan 42 fleet this was their first opportunity of the season to race against their classmates in a one-design format.

Racing in the class is the German-flagged Dralion, with owner Pit Finis – who is the class’ Owners Representative – racing with a multinational crew representing eight countries, the diversity being something of a tradition in the ClubSwan 42 class, which also requires each yacht to have at least three crew who are under 26, female or family members.

“Throughout my campaigns, I always put people from all over Europe on my boat,” said Finis.

“For example, I am the only German on a German-flagged boat. Sometimes my wife comes with me, but we are the only ones. I have people from Denmark, from the Netherlands, from Poland, from Belgium, Spain, Portugal, we are very multi-national”

Newcomer Enis Ersü joined the ClubSwan 50 class after acquiring a second-hand ClubSwan 50 now named Xai Vision. “I have now met many owners and it is a very nice community,” he said. “Some have teams which have been together for many years, like a small family, and I loved it. Bringing amateurs and professionals together is also good.

“We had done some practising and it was OK, but today in the Practice Race it was surprising – it is a much higher level, much more challenging, so I will be happy over the next few days if we can get some good results. Even if we are not at the front, we will have a good time.”

And in the ultra-competitive ClubSwan 36 class Cuordileone helm Edoardo Ferragamo is anticipating a thrilling week: “We are all very excited about tomorrow. It is the first official day and it is going to be windy, so you will see some high speeds out there. The fleet is extremely competitive. The level has gone up so much and everyone is in it to win it. We will see how it goes but I think it is going to be a fantastic week.”

That is a view shared by Federico Michetti, Head of Sport Activities at Club Swan Racing. Looking ahead to the week he said: “We’ve got 34 boats, 15 nations – the Swan One Design Worlds is going to be a blast.

Immediately before the Swan One Design Worlds the Real Club Náutico de Valencia also hosted the high-profile SM La Reina Trophy regatta. The Swan 45 Porron IX won Class ORC 0-1, with another Swan 45 Brujo, placing third. While the 45s are not racing at the Worlds, a ClubSwan 42 that is, Koyre’ – Spirit of Nerina, made the most of the warm-up opportunity and came fifth in Class ORC 2.

Back ashore the highly valued social side of ClubSwan Racing swung into action in the late afternoon at the Opening Cocktail party hosted by the Real Club Náutico de Valencia with the welcome contribution of Official Sparkling Partner Ferrari Trento.

Leonardo Ferragamo, Chairman of Nautor’s Swan, spoke at the Opening Ceremony and was fulsome in his praise of the Real Club Náutico de Valencia: “We are proud to be here for the first time and the club has been so welcoming.

“Being here and seeing all the young sailors in their dinghies at the club’s sailing school is inspirational – it is a great example of how education can work through the sport of sailing, as well as building tomorrow’s top sailors.”

The prestigious club is also fully supportive of ClubSwan Racing’s sustainability mission and plastic-free regattas, with water dispensers provided for all competitors.

Welcoming the teams Marisa Arlandis, the President of Real Club Náutico de Valencia, said: “Only a few cities in the world have had the privilege of hosting an event like this, so we want to exceed all expectations. We hope we have good conditions and that owners and crews enjoy the atmosphere in the Race Village.”

The Opening Ceremony was brought to a close with a mascleta, a vibrant pyrotechnic and firework celebration that is unique to Valencia.

Meanwhile, as at previous CSR events in Tuscany and Sardinia, the unique collaboration mixing contemporary street art with more traditional art was continued by Spiros Zouboulakis and the NOS Graffiti Team.

Also on display in Valencia is the Swan Shadow, Nautor’s first foray into the motoryacht segment with the iconic powerboat capable of 55 knots.

Four days of intensive racing begins on Wednesday which will decide the World Champions in each of the three classes with prizes for the top three yachts in each class, as well as the top nation at Swan One Design Worlds, which will add to the total in the season long Nations League competition which is a central part of the ClubSwan Racing experience.