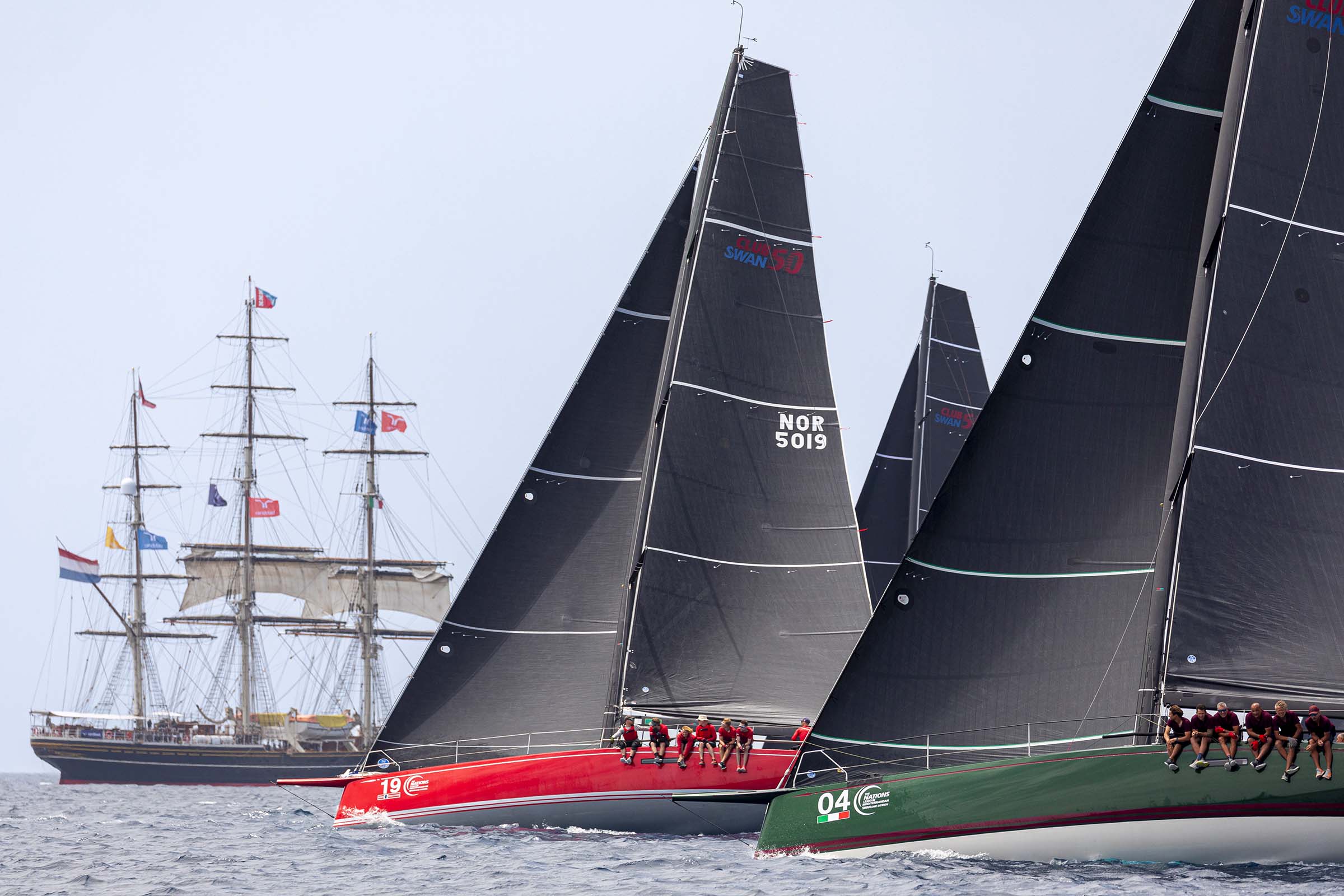 Posted at 08:31h in News by nautorswanuser

Four days of intense racing in the spectacular setting of southeast Sardinia came to a conclusion on Saturday with the final places decided at the Swan Sardinia Challenge.

The crystal-clear waters off Villasimius were witness to 10 hard fought and ultra-competitive races, with fortunes across the three one-design classes varying rapidly on each leg of the racecourse.

The Swan Sardinia Challenge was able to celebrate a successful regatta at what was a new venue for the Nations League, with the Marina di Villasimius providing a warm welcome alongside the support provided by the Regione Sardegna, the town of Villasimius and the Marinedi Group.

Giovanni Pomati, Nautor Group CEO said: “This is our first time in Villasimius, and it’s been an amazing ‘first’! Watching 26 boats competing in this beautiful setting of a natural park. A full programme of 10 races with excellent wind conditions from 8 to 25-plus knots has been quite a show. We want to thank the local authorities and the Marina di Villasimius for hosting us and for gifting us with great special moments during this event.”

Marcus Brennecke’s well sailed Hatari emerged at the top of the ClubSwan 50 leaderboard, holding off persistent and determined challenges from Louis Balcaen’s Balthasar and August Schram on Stella Maris.

“We are very, very happy,” said Brennecke. “It’s the result of lots of different elements coming together. First, there’s the crew – we are sailing together the whole time, we don’t make a lot of changes, and we are very consistent with the same crew for the third season, plus we get along very, very well. They are obviously good sailors but also, we have lots of fun.

“And we try to optimise everything, a little bit here, a little bit there, we do our training and do our best to try to sail very consistently.”

A delighted Thompson said: “It’s great – as much relief as delight because you know we had already had a decent lead going into this morning and really the only people who could beat us were ourselves, but we managed to avoid that, so that’s fantastic and everyone did a great job.

“It was a fantastic day’s sailing; in fact the best day’s sailing I’ve ever had in a ClubSwan 36 in terms of wind and sea conditions and we recorded a top speed of 21.5 knots today which is pretty fast. I ‘ve got to say it’s not as scary as it looks. You’re slightly scared but you’re very exhilarated and actually the boat handles so well in a breeze.”

And he added: “We just really focused down on the simple things and tried to make sure we do all of them really well and not complicate our lives, and somehow that worked pretty well.”

“Villasimius gave us an unforgettable four days of sailing,” said Terrieri. “Beautiful conditions and great competition. It was truly a pleasure.

“It is an honour to come to this regatta. It was a very difficult competition, because the three boats are all of the highest level, and therefore we always had very close racing.”

The Swan Sardinia Challenge got off to a memorable start with the Opening Ceremony held in Villasimius’ ancient castle bathed in Sardinian sunshine. Owners and crews were also all presented with gifts from the innovative clothing company Sease, a ClubSwan Racing partner.

Racing got underway the following day in ideal 11 to 18 knots in the magnificent setting of the Capo Carbonara Protected Marine Area, with the windward mark just in front of Fortezza Vecchia.

The robotic racing marks from MarkSetBot proved their worth from the outset, not only protecting the seabed as part of ClubSwan Racing’s commitment to sustainability, but also able to be easily repositioned to take account of windshifts.

As ever the racing was competitive and after three races the class leaders – Hatari (CS50), Fra Martina (CS36) and Blue Sky (S45) – were each only a point ahead of their closest rivals.

Flying the flag for Guernsey in the Channel Islands, Black Seal won all three races in the ClubSwan 36 class to open up a seven-point lead to G-Spot, while Hatari stayed consistent with a 2-4-2 scoreline to remain in pole position in the ClubSwan 50 fleet, though with both Balthasar and Stella Maris hard on the German boat’s heels. In the Swan 45s Ulika took her turn in the top spot.

The day was rounded off with a glittering owners’ dinner hosted by Randstad which also featured a charity auction in support of the Marevivo environmental organisation’s beach clean project in Calasetta. The auction provided an opportunity for ClubSwan owners to add their support to projects aimed at protecting the ocean environment.

Over the half-way point and the third day’s two races – which took the sailors close in to Sardinia’s magnificent coastline – saw Black Seal and Hatari begin to edge out ahead of the competition, though the Edoardo Ferragamo helmed Cuordileone took a race victory in the ClubSwan 36 class to end Black Seal’s five race winning streak. Meanwhile Blue Sky returned to the top of the Swan 45 table.

Perhaps appropriately, the final day on Saturday saw the most dynamic sailing conditions of the event with the two concluding races held in an increasing breeze which reached over 20 knots with gusts of 25 knots and a choppy sea.

Finishing proceedings with a 1-2 scoreline, Hatari confirmed her top spot in the ClubSwan 50 class never having dropped below fifth position and holding a robust 15-point lead over Balthasar, with Stella Maris completing the podium amid celebrations at the concluding Prize-giving Ceremony.

Having banked the points over the first three days, Black Seal took a well-deserved ClubSwan 36 victory, while Cuordileone took the final race win to fend off Haakon Lorentzen’s Mamao and Nikolai Burkart’s Goddess.

Wins in both final races was not quite enough to lift Ulika to the top of the Swan 45 leaderboard, finishing just a point behind Blue Sky.

In the Nations League standings Germany had 28 points, four points clear of Italy thanks to Hatari’s endeavours backed up by Sonke Meier-Sawatzki’s fifth placed ClubSwan 50 Niramo, with Monaco in third place with 16 points ahead of Belgium and Great Britain – tied on 15 points – in the 11-country table.

Following the celebratory prize-giving Federico Michetti, Head of Sport Activities at ClubSwan Racing, expressed his delight at a successful regatta. “Spectacular is the right word,” he said. “Four days of amazing sailing conditions, very windy with flat water. Sailing Villasimius’ crystal-clear waters was just a blast and I am very happy. Villasimius is a great venue with super-tight racing, great fun – not only on the water but ashore as well. Tight racing and fun – that is a great combination. That is what ClubSwan Racing is all about.”

Meanwhile ashore the NOS Graffiti Team were again present with their unique artistic combination of contemporary street art and the more traditional art of sailing.

The whole ClubSwan Racing family will gather again in Valencia, Spain, from 5-9 July for the Swan One Design Worlds which will establish the 2022 World Champions in each of the one-design classes – the ClubSwan 36, ClubSwan 42, ClubSwan 50 and Swan 45.