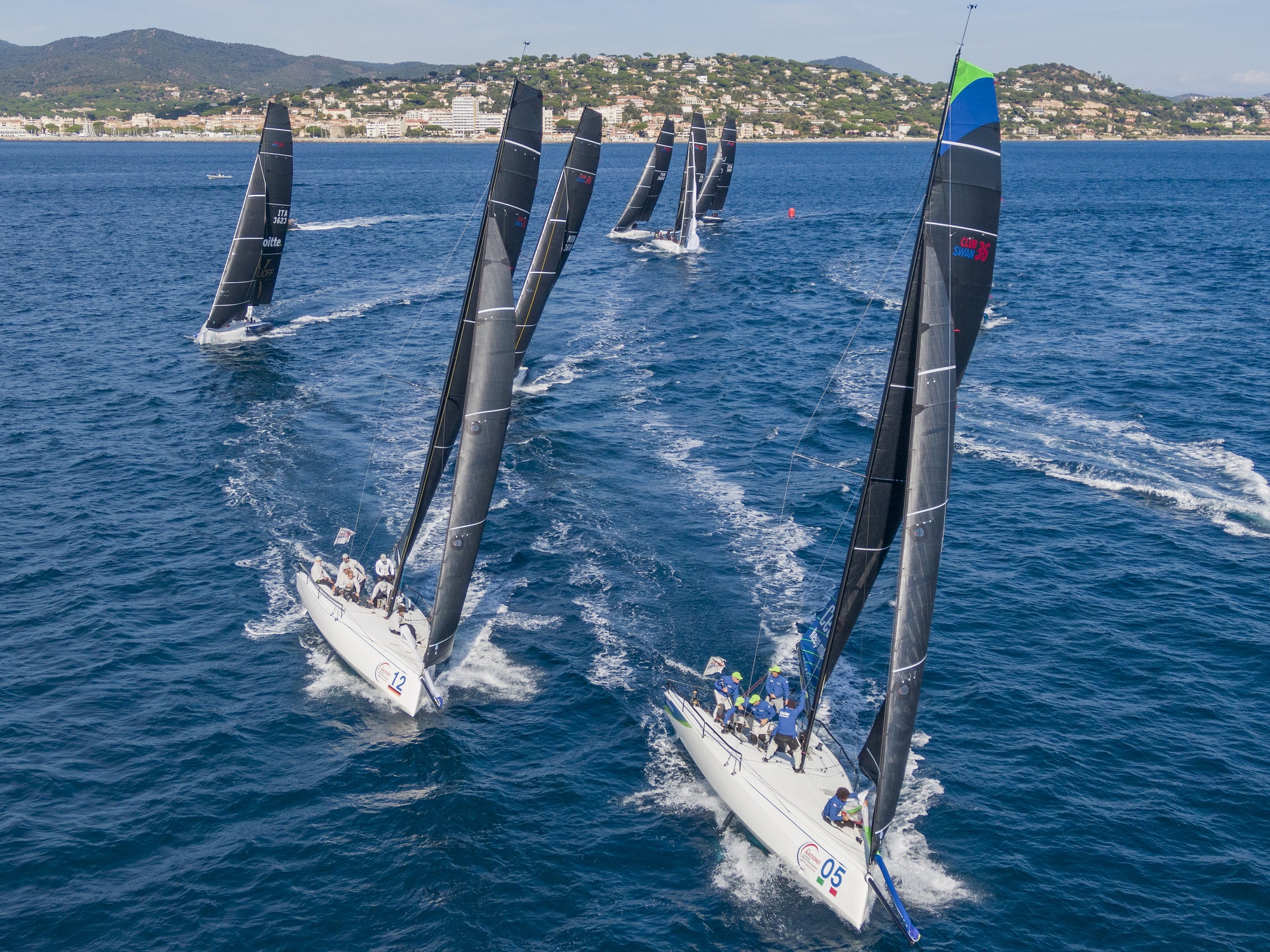 Crews were scrambled early this morning with the news that racing in the Swan One Design Worlds was to begin early at 11am to take advantage of a good sailing breeze. After the light winds and long waiting of yesterday, patience was indeed rewarded with near perfect conditions: a 12-15 knot breeze blowing over the land from the west, light seas and clear skies.

The race committee from the Société Nautique de Saint Tropez, under the direction of Ariane Mainemare, wasted no time setting the twin courses for the four classes. Shifts of 20-30 degrees kept them guessing at times, but there was still time to schedule two good starts for the full 41-boat fleet.

First over the startline without mishap were the ClubSwan 36s, which soon seemed to favour the right-hand side of the course, tacking northwest until close in off Sainte Maxime. Then came the 42s, where a more southerly course led them closer to St Tropez. There was plenty of noise on the water – the creaking of sheets under huge loads; the urgent cries of ‘hoist, hoist’ as the boats rounded the top marks; and the lazy flick of the spinnaker’s leech as the trimmer got it just right.

Where yesterday, the boat that won the start often led to the finish, there were more tactical decisions to make today as boats hunted the pressure and called the shifts. In the small but rapid ClubSwan 36s, Giangiacomo Serena di Lapigio’s G-Spot was never far from the front of the pack, and he maintained an unblemished scoresheet with two bullets to add to yesterday’s one.

“We’re very pleased because, contrary to the result where it seems we are ahead of everybody, in reality we have been fighting,” said Serena di Lapigio. “Especially in the second race of today, we turned the first mark in fifth, then it was a nice battle. Our tactician read the shift of the wind very well and that of course is the secret, because at the end the boats are the same.”

Perennial sparring partner Vitamina was close on his heels in second place, but a full seven points adrift. The battle for third in this class looks much closer, with Sixth Sense, Sease and Fra Martina all in close contention.

In the ClubSwan 42s, the top two remain unchanged after three races. The impressively consistent Natalia of Natalia Brailoiu still leads, adding a bullet and a second to yesterday’s score. Her closest rival is the French boat Raving Swan, owned by Jerome Stubler. He revelled in the challenge posed by the shifty conditions.

“The wind was moving by 20-30 degrees, so you need to keep control, and the wind speed was moving from 10 to 20 knots,” Stubler said. “That means you have to trim the sail very, very quickly, and to steer it and keep the angle in all those shifts. I like that and said to myself ‘Jerome, you can make a difference, so concentrate!’”

Small mistakes are quickly punished on the water, he added. “We did two very nice starts. We were the first to the mark on number one, then after the spinnaker leg we were second. We made a little mistake the second time we set the spinnaker, and we finished third. Just a few mistakes, but the speed of the boat is great.”

A nice duel is developing in the Swan 45 class. Lennard van Oeveren’s Motions is still the clear leader with two firsts and a second, but From Now On, owned by Argentinian Fernando Chain, is mounting a spirited challenge. Just two points separate the two boats.

“It was a great day for sailing – nice winds,” said Chain. “There were big wind shifts, but they didn’t make the difference for us. We have a boat that is very fast and we are learning how to move on it. We expect to get a good result, but whatever it is, it was worth it to come here.”

The big ClubSwan 50 boats loved the extra breeze today, surging upwind and flying back down from the mark at around 15 knots carrying staysail and gennaker. Here again, the season’s strongest performer Hatari showed her mettle. With a first, second and fourth, she tops the leaderboard after three races. But compatriot Hendrik Brandis in Earlybird leapt up the rankings today with a near faultless first and third place, putting him in second overall.

CS50 Stella Maris also scored a well-earned bullet in the last race, propelling her into overall third place. August Schram’s boat has hovered just out of range of a podium finish for much of the season, and the owner was clearly delighted by the achievement.

“It reminds me a lot of our lakes in Austria, where we have the same conditions more or less: very little waves, many wind shifts and lots of gusts, so we felt quite at home today,” Schram told us. “In this fleet you can be first at the windward mark and then one leg later you are dead last. In fact, this happens to us quite often! The biggest thing that is necessary to win in this fleet is to be consistent across a regatta, and we are still learning that!”

Following a prizegiving sponsored by Gottifredi & Maffioli, Nautor Group CEO Giovanni Pomati summed up the day neatly. “On average we have very good conditions. Changing winds are challenging our teams more and more, and that is all part of the game. This end of the season in St Tropez, with all our Swans, with the town available for all our owners and teams – it is really amazing. We are not only proud, but excited to all these beautiful boats lining the quay. It is a fantastic view.”