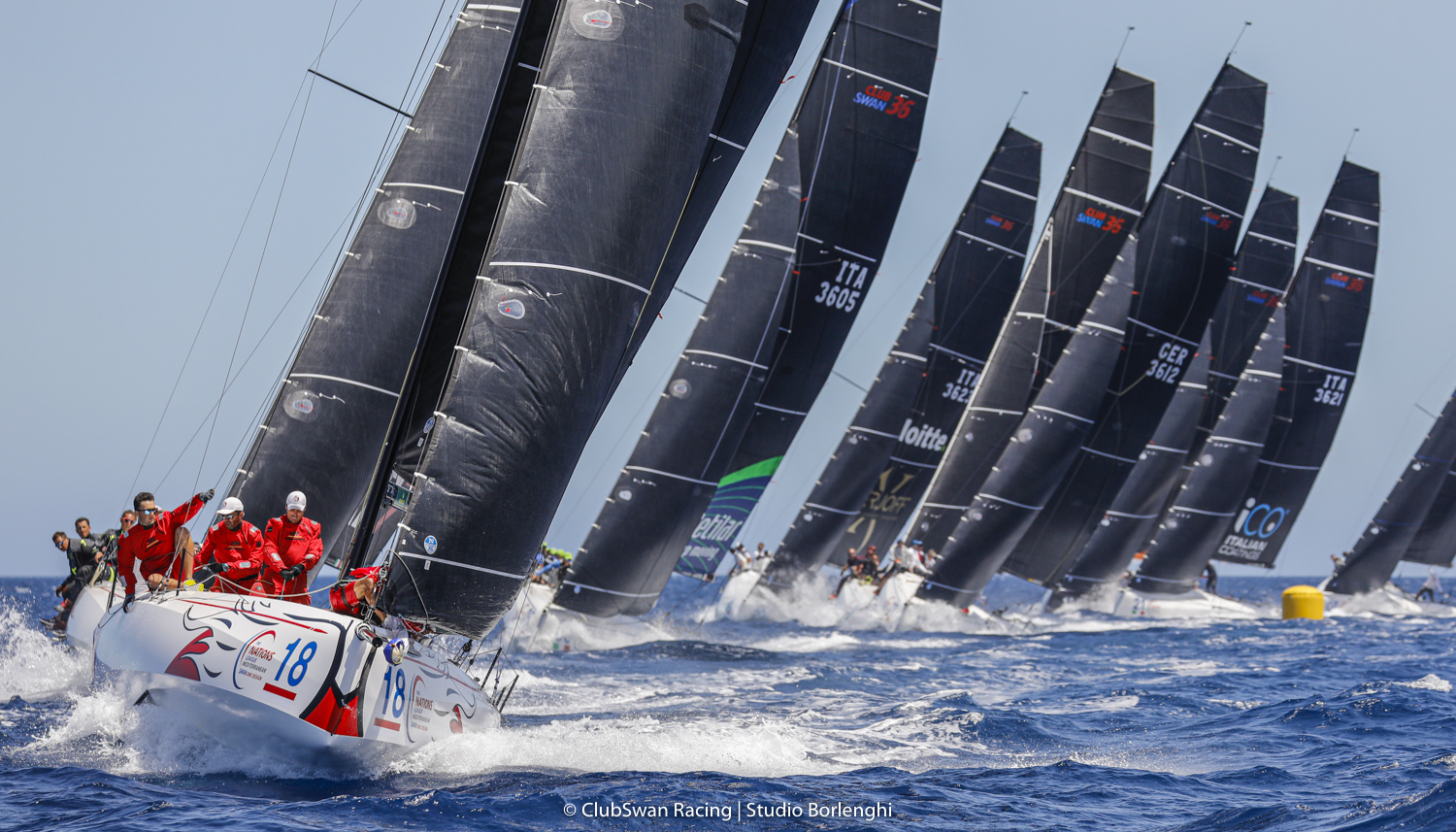 Crews and owners are making their final preparations ahead of the biggest event in the ClubSwan Racing calendar, which gets under way on 13 October. They’ve had their eyes on the Swan One Design Worlds in St Tropez since the start of the season and have been building up to glory. A record fleet of 42 boats is starting to assemble, intent on battling it out for the ultimate title in their class.

The lure of being crowned World Champion in St Tropez has drawn some new boats into the fleet. ClubSwan 50 Django is well known on the IRC/ORC circuit, but owner Giovanni Lombardi is keen to take a tilt at the big prize. There are also three new entrants in the Swan 45 class, Ex Officio, From Now On and Blue Sky. It means there’ll be some new flags flying when racing gets under way on 13 October – notably the Greek and Argentinean colours. Owners from 18 different nations are taking part.

All four ClubSwan classes are well represented, with ten CS36s, seven CS42s, eight Swan 45s and an impressive 17 CS50s. With so many of the bigger boats on the racecourse, the start is going to be even more crucial than usual. Tacticians will have to weigh up the merits of clean air versus scrapping at the favoured end of the line. Starts so far this season have been pretty clean, but we’ve witnessed several times how hard it is to come back from a starting penalty against this hugely competitive fleet.

“The Swan One Design Worlds mark the end of the season for ClubSwan Racing and we are delighted to have 42 competitors from 18 nations celebrating the sport of sailing with us,” says Giovanni Pomati, Nautor Group CEO. “Watching so many one designs, helmed by talented owner-drivers, competing together and testing their abilities in the iconic setting of St. Tropez makes us very proud at Nautor.

“18 different cultures racing at sea and enjoying their time ashore highlight how fun, inclusive and amazing this sport is, and we are delighted to be one of the few yards to organise such events. We will keep working very hard in this direction to boost the exhilaration the sport of sailing can give.”

Looking to defend their 2020 titles are Marcus Brennecke’s Hatari in the CS50 class, Lennard van Oeveren’s Swan 45 Motions, and Andrea Lacorte’s Vitamina in the CS36 class. After the restricted number of yachts participating last year due to the pandemic, the 2021 Worlds promise to be more competitive than ever.

Many yachts in each class are capable of carrying off the title, and the jockeying for position has been intense this season. After four events, the top boats in each class are G-Spot, the CS36 sailed by Giangiacomo Serena di Lapigio; Natalia Brailoiu’s CS42 Natalia; Stefano Masi’s Swan 45 Ulika; and Brennecke’s CS50 Hatari.

Conditions in the sheltered Gulf of St Tropez are typically warm and settled in October. The elements here are perfectly suited to providing exactly what the ClubSwan boats enjoy the most: smooth seas and a good breeze, with an outside chance of stiffer Mistral winds from the north.

For the winners, it will be the vindication of a whole season of hard campaigning. But every crew has made huge improvements over the year, and everyone will return home satisfied and delighted by the hospitality of the Société Nautique de St Tropez, which is hosting the racing.

More than any other town on the glamorous French Riviera, St Tropez embodies the spirit of elegant sailing endeavour. Sporting fair play and timeless lines are as much part of life there as pétanques on the Place des Lices or sundowners in the cafés around the Vieux Port.

It’s going to be a big week of racing.

Watch this space  https://yachtscoring.com/emenu.cfm?eID=14665 for full details and to check the results!