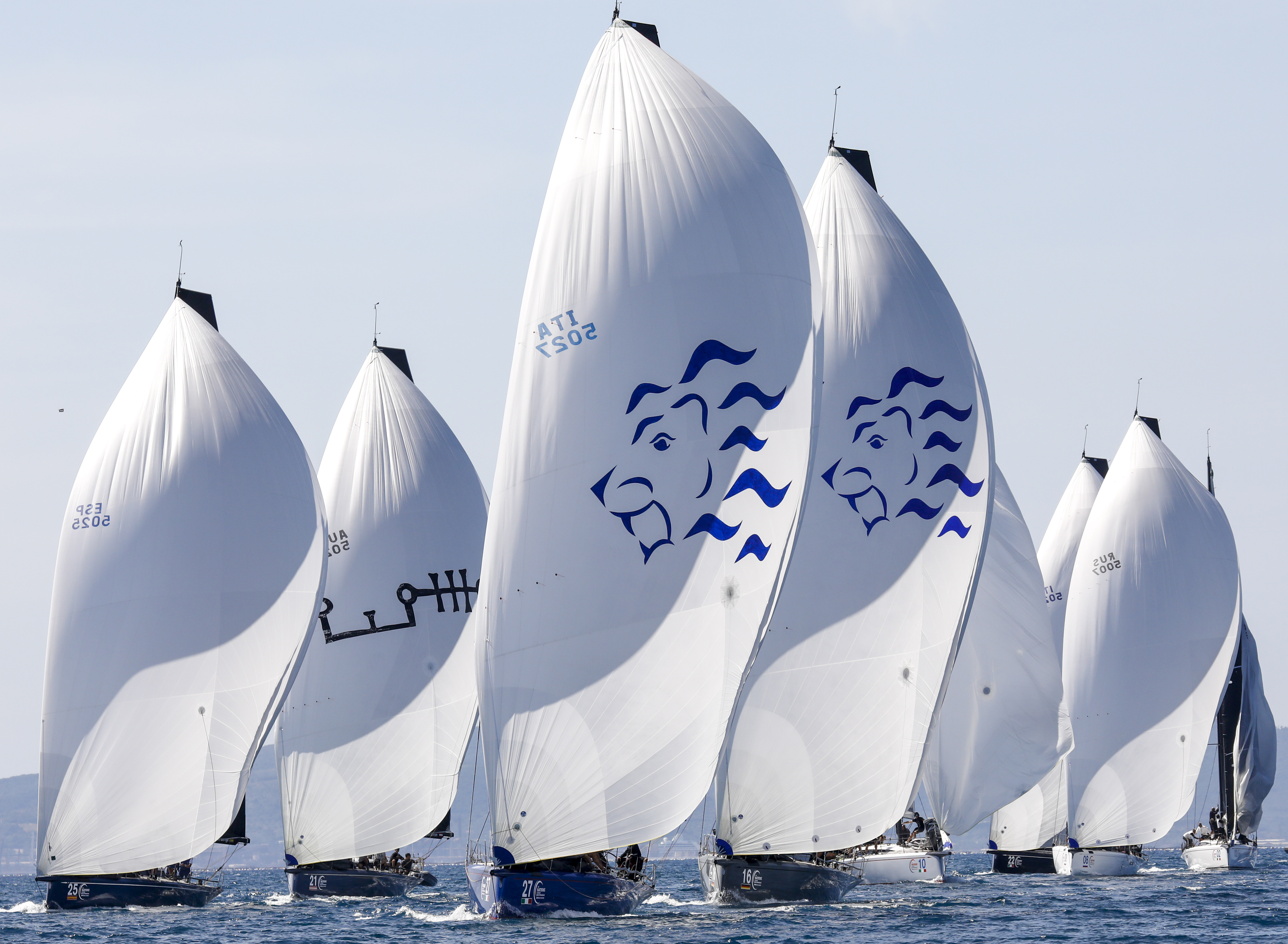 A day of mixed fortunes lay in store for the ClubSwan fleet in Scarlino today, as lighter 8kt winds from the west set in. The 23 boats of the Swan Tuscany Challenge were put through their technical paces as they battled to maintain boat speed and minimise manoeuvres.

The results after a day of bright sun were stark. In the larger ClubSwan 50 class, the duel between Marcus Brennecke’s Hatari and Leonardo Ferragamo’s Cuordileone intensified. Just one point separated the top two boats overnight, and they both knew the start would prove crucial on a day of light airs.

Hatari drew first blood with a bullet in race one, compared to Cuordileone’s third place. Hatari took another point on Ferragamo’s boat in the second race, but in the final competition the situation was reversed, with Hatari coming off second. As the boats came in after a long, focused day on the water, Hatari had jumped into pole position overall – leading by one slim point.

“They are very fast – the fastest in the fleet in this light breeze,” said Hatari tactician Markus Wieser of his Italian rivals. “It didn’t matter which side of the course you took, both came through. The most important thing was a clear lane in these light winds and to minimise tacks.”

“It was lovely out on the water,” said Ferragamo. “Especially as we had a lot of match racing with Hatari. That doesn’t happen so often in classes like this, because all the boats are very close to each other.”

Clash of the titans tomorrow

It sets the scene for an epic battle for first place tomorrow on the last day of racing. “Today we sailed our own race. Maybe tomorrow we will sail a bit against Cuordileone, but that’s not our plan,” added Wieser. In third place after the nine races so far, Andrea Masi’s Ulika looks almost unassailable, unless Stefan Heidenreich’s ONEGroup rediscovers its earlier form and achieves a podium finish in the last two races.

Battle royal for the ClubSwan 36

Among the smaller ClubSwan 36 class, the field is wide open. G-Spot surrendered her position at the head of the table to Vitamina, after an uncharacteristic last place in today’s second race. Vitamina, meanwhile, sailed consistently well, managing a first, second and third place in the day’s races.

“It was another very nice day with fabulous conditions and nice weather,” said Vitamina’s owner Andrea Lacorte. “The racing is getting tougher and more challenging, but the boat has a lot of potential. She’s damn fast. Today the trimmers were fantastic – they didn’t make any mistakes at all. The key is to understand the boat and remain consistent.”

With so little ClubSwan racing last year, the CS36 teams are all facing a similar challenge in getting to grips with the new boat. One key has been the foiling system, which provides lift to windward for very narrow upwind angles. Another has been to see what variables make the boat perform best upwind, and all the teams are reporting that a generous heeling angle of around 25 degrees is about right.

“We are on a very innovative boat which is still being understood even by the pros,” said Giacomo Loro Piana, co-owner of CS36 Sease. “The process of discovery is super important. For instance, we’re not even sure how best to balance the boat upwind, but in light airs, you need to put people on the leeward rail. In training we had 30 knots of wind and the boat touched 25 knots. She remained super stable and responsive. I don’t think there’s any way back from foils.”

Farstar continued a run of good form and found a bullet in the day’s second race. She remains in third position after today’s racing, but still within touching distance of the top spot. “Today was a hard day,” said a weary Simon Sivitz, who trims mainsheet. “We tried to improve again, but we made some small mistakes which cost us points. For us, lighter winds are harder.”

Luna Rossa helm Francesco Bruni, who has been in action on board the CS36 Fra Martina, is also keen to see some stronger winds to put the foil to the test. “For me it’s a little bit hard to go back to displacement boats and get again the feel for it. We have to improve our speed and performance in very light winds, upwind and down. No drama – we knew it was going to be hard and the level of the fleet is very high, so we knew this first event was going to be a test for us.”

The racing was rounded off by sponsor Banor, who presented the day’s prizes before hosting owners at the Tarantella terrace for a socially-distanced dinner. During the evening, another surprise lies in store, as Swan is due to unveil the fabulous Shadow motoryacht in front of the guests, marking its entry into a fresh market.