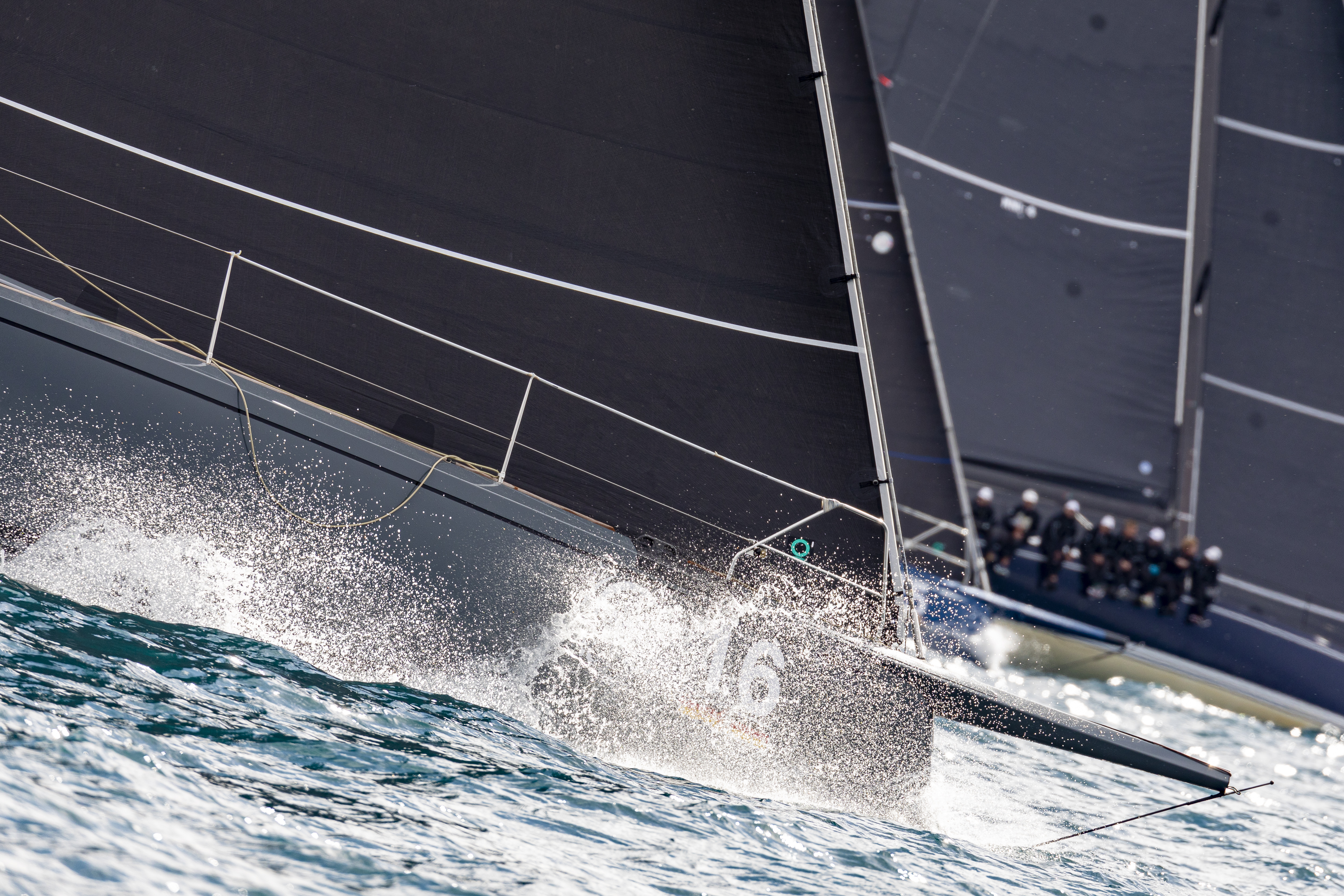 Scarlino, Italy, 15 October 2020 – Unstable weather conditions on the Tuscan coast forced a shortened racing programme today at the Swan One Design Worlds. With just one windward/leeward race completed, the impressive starts and performances from today’s winners – Onegroup (ClubSwan 50), Motions (Swan 45) and Cetilar-Vitamina (ClubSwan 36) – proved decisive in reshaping the respective Class leaderboards. The Race Committee, led by Ariane Mainemare, did an excellent job in providing a window for one race to be held, before ensuring crews returned safely to the marina as a thunderstorm approached

During two days of racing, the 26 competing crews have not only had to contend with an incredible level of competition but complex, shifty conditions. Today provided another example of engrossing Swan One Design racing with crews needing to be on top of their game to read the wind and find the incremental gains to outdo world-class opposition.

ClubSwan 50: Hatari retains lead; gap closes
Following an erratic performance yesterday, which saw a bullet sandwiched between a tenth and eleventh placed finish, Stefan Heidenreich’s former world champion Onegroup (Germany) began the day in determined fashion dominating proceedings. “It was a confident win,” explained tactician Jochen Schümann.“We made the best start at the pin end and held our lead. It was a very good performance from both driver and trimmers. In the end, it looked simple because we did all the right things.”

Despite the boat’s pedigree and today’s win, Schümann admits challenging for the ClubSwan 50 world crown this week is perhaps unlikely. “If we make the top six we will be happy,” admitted the German sailing legend. “We are working to develop a young foundation of sailors and there is bit less pressure on us. It will be a thrilling championship, up to six crews could win the world title.”Two wins from four races suggest Onegroup’s potential may be even greater than her stated ambition.

Despite her poorest performance in the regatta, ninth, Marcus Brennecke’s Hatari continues to lead the competition although rival German entry Niramo has reduced the gap to two points. The top four remains unchanged from yesterday.

Swan 45: Motions exerts influence
Motions (Netherlands) has claimed sole leadership of the Swan 45 worlds. “Three to four boats are aiming for the title,” reflected Motions tactician Jes Gram-Hansen before today’s action. “After a tricky day yesterday, our aim is to get a jump on K-Force.” Owner Lennard van Oeveren admitted, post-race, his crew achieved this with great assurance. “Today was a nice race, we made a great start and everything worked well.” In the five-strong fleet, Dutch rival K-Force had to settle for third and is two points behind the leader. Returning to form, Stefano Masi’s Ulika claimed second, her best performance of the regatta.

ClubSwan 36: One team to beat
Top performer yesterday, Andrea Lacorte’s Cetilar-Vitamina (Italy) extended her lead in the overall standings following another excellent day on the water. Despite a valiant effort from Sixth Sense (Italy) she held the lead for almost the entire 52-minute windward/leeward race.

It proved to be another day in the middle of the fleet for Riccardo Ferragamo and his crew on ThirtySix (Italy). As tactician Diogo Coyolla explained each day is another step in the right direction in fulfilling the boat’s potential: “We are all getting used to this new boat. Any mistake and you feel an immediate impact on speed. We are facing some very good teams who have sailed together for many years.”