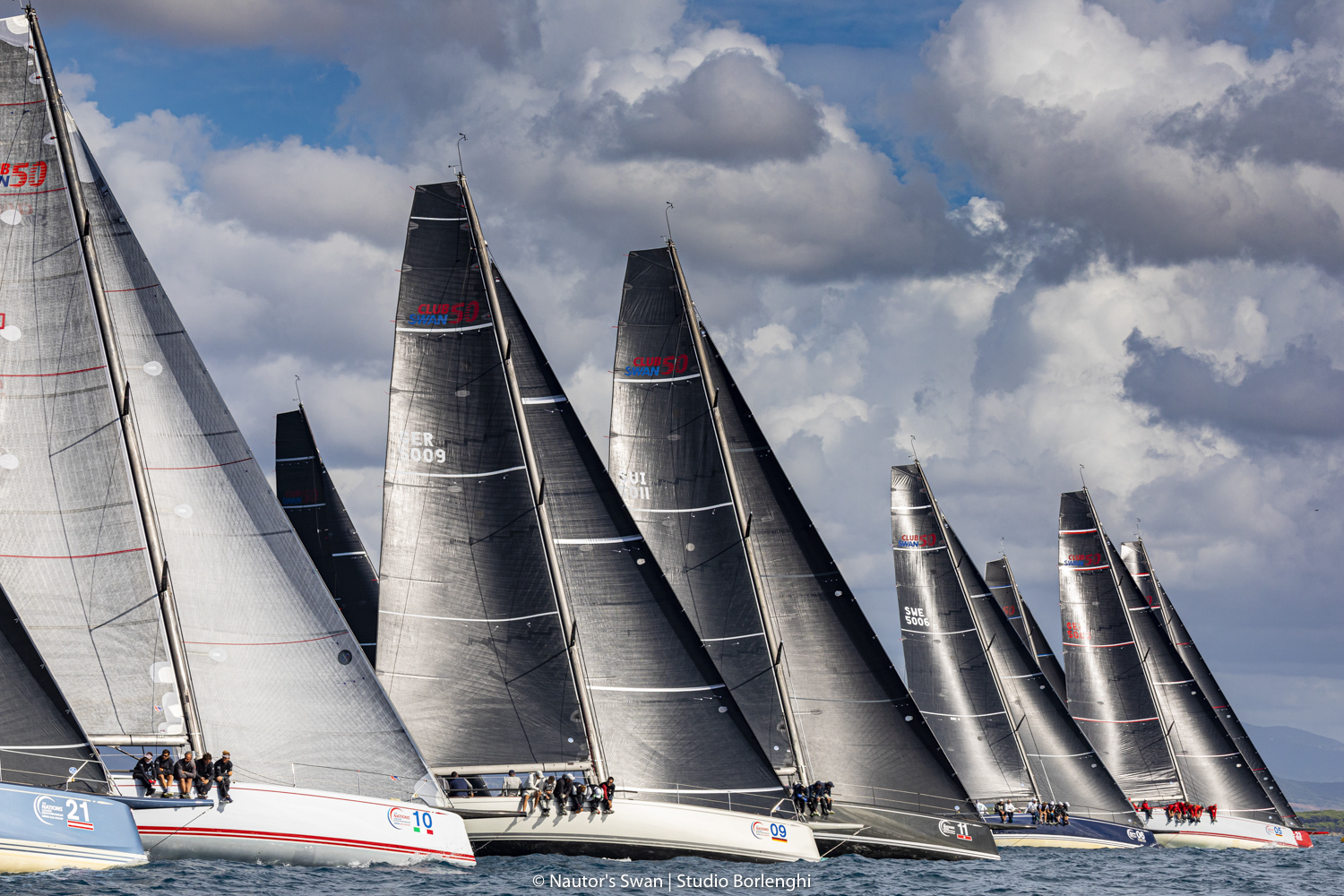 Conditions were varied – consistent breeze and sunshine for race one gave way to showers, grey sky and light winds as the afternoon developed. On the water, the evidence is that the hallmarks of gripping One Design racing will define the week’s competition.

ClubSwan 50: Hatari takes control
Despite a sluggish start the defending world champion Skorpidi (Russia) soon laid down an early marker to her opposition dominating the first race of the day. Skilfully detecting the optimum position on the approach to the first windward mark, she found herself in the envious position of being able to control her rivals for the remainder of the contest.

ClubSwan 50 racing though is highly-competitive and unpredictable. Come the second race, Skorpidi’s bright start evaporated as she lost ground to determined opposition and eventually finished thirteenth. German crews Earlybird, Hatari and Onegroup found themselves challenging for victory. Guided by renowned tactician Jochen Schümann, Onegroup, the 2018 world champion, read the wind direction best on the final leg to see off the challenge of Hatari, led by the tactics of Markus Wieser.

In the third and final race, Skorpidi again took the bullet following a decisive move ahead of the second windward mark. Tenaz (Spain), on a day of rapidly improving performances, finished runner-up. However, with two seconds and a fourth, Hatari proved most adept at dealing with the intensity of the day and heads the leaderboard. Owner Marcus Brennecke was understandably delighted with his crew’s performance and approach: “We are very happy with our start to the championship. We play it conservative and not too extreme. In the last race we were again in second place approaching the finish but lost some positions when deciding which side to cover.”

Swan 45: Trio move clear
In the Swan 45 Worlds, three boats sit on four points after a two race first day. The Dutch crews on Motions (race 1) and K-Force (race 2) claimed the bullets with Ange Transparent of Switzerland second on both occasions. Their collective consistency has seen them pull away from the challenge of the two Italian entries Ulika and Thetis who must recover tomorrow from a challenging opening day if they are to mount a challenge for the title. K-Force owner Jan de Kraker was fully of admiration for his crew’s recovery after a poor start to the day: “In the first race we made a tactical mistake at the start but recovered well. During the second race everything went well, we even had some luck with the wind shifts. We know Motions very well as a fellow Dutch team and following our competition in the recent Swan Tuscany Challenge.”

ClubSwan 36: Cetilar-Vitamina edges clear
The Gold Cup is the prize on offer for the ClubSwan 36 class, officially launched less than 18 months ago in Scarlino. Observing how competition develops on the water is one of the week’s key talking points. Andrea Lacorte’s Cetilar-Vitamina (Italy) exerted her authority winning two of today’s three races with Giacomo Loro Piana’s Sease (Italy), two seconds and a third, emerging as her nearest rival. Goddess (Germany) claimed a bullet in the second race, a highlight of a mixed day. “The crew did a fantastic job,” explained Lacorte.“The boat performed well especially upwind. The learning curve of all the crews in this class will take some time. Competition is tough and will continue to develop over the coming years.”

The second of four days of racing commences at midday tomorrow.

Follow the Swan One Design Worlds
To follow the ClubSwan 50 and ClubSwan 36 races, live tracking by Trac Trac is available here.