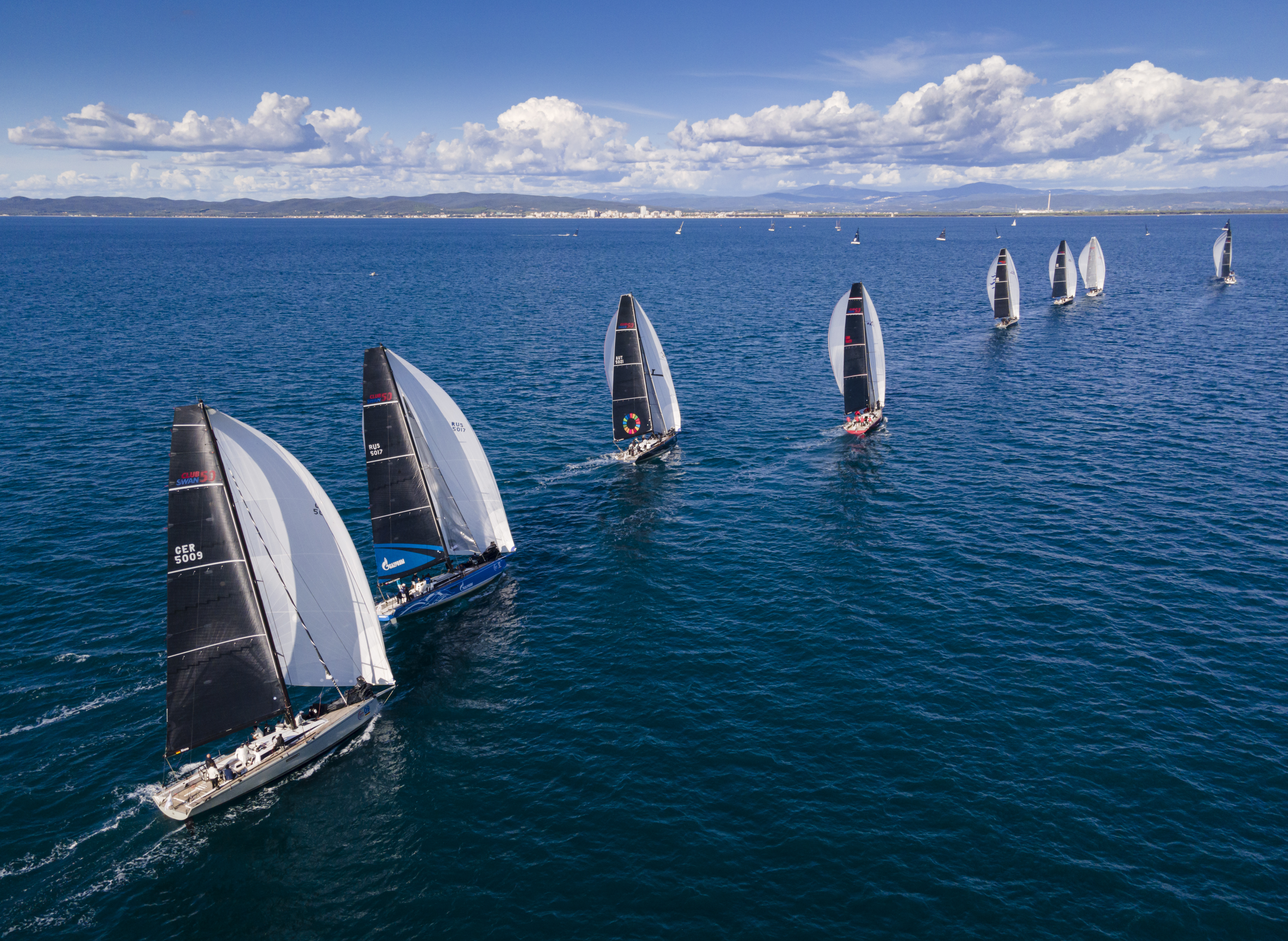 14 Oct A CELEBRATION OF SAILING: SCARLINO OPENS THE SWAN EXPERIENCE WITH THE SWAN ONE DESIGN WORLDS

Scarlino, Italy, 13 October 2020 – Twenty-six Nautor’s Swan yachts from ten countries are braced for tomorrow’s eagerly-anticipated start to the inaugural Swan One Design Worlds. Four days of intense racing in a sailing environment fully familiar to Swan competitors, the Baia Scarlino on the Tuscan seaboard, will decide the verdicts of the season’s most coveted prizes. World title crowns are on offer for the ClubSwan 50 and Swan 45s and a Gold Cup title for the ClubSwan 36.

Exhilarating One Design racing forms one half of a weeklong Nautor’s Swan Experience, with the marque also organising its own private boat show. Officially opening on 16 October, it presents a unique occasion and an alluring 360º insight into the world of Swan. Exhibit examples from the renowned Swan range will include Swan 78, Swan 65, Swan 54 and Swan 48 models. The event commenced this evening with an Opening Ceremony in the Marina di Scarlino. Leonardo Ferragamo, Chairman of Nautor’s Swan, provided a personal welcome to competitors: “This week presents a unique moment in the history of Nautor’s Swan where we will be able to share with so many Swan owners and fans what the Swan world is all about. Furthermore, it will take place in the Marina di Scarlino, a place we have tremendously at heart. I’d like to thank all of the people who have worked hard to make this event possible.” THE COMPETITION ClubSwan 50: Since its inception in 2016, no one team has dominated ClubSwan 50 racing. Testament to the extreme and exacting level of competition. In a class which attracts some of the world’s most renowned professional tacticians (to cite a few in Bouwe Bekking, Tommaso Chieffi, Fernando Echávarri and Jochen Schümann), there is simply no room for error on condensed racecourses and against skilled, highly-motivated opponents.

Fifteen ClubSwan 50s from eight countries will be on the start line tomorrow. Dmitry Rybolovlev’s Skorpios (Russia) arrives as the defending World Champion having taken the crown from Stefan Heidenreich’s Onegroup (Switzerland) twelve months ago in Palma. One of the most telling examples of the unpredictable nature of the competition was provided at last year’s Scarlino Swan One Design. Eight different teams won the nine races. Taking the regatta on the final day was Sonke Meier-Sawatzki’s German entry Niramo. During the recent Swan Tuscany Challenge at the same venue, another German yacht, Hatari, emerged triumphant. Consistency in One Design racing is key. The overall winner is not always who wins the most races, but who limits mistakes and misfortune. Experienced crews like Leonardo Ferragamo’s Cuordileone (Italy), Hendrik Brandis’s Earlybird (Germany) and August Schram’s Stella Maris (Austria) will all be amongst those hoping to outperform their rivals.

Swan 45: Five yachts from four countries will contest a wide-open looking Worlds shorn of some of the crews who have dominated recent seasons. Lennard van Oeveren’s Motions (Netherlands) performed admirably in finishing second both in Scarlino and at the Swan 45 Worlds last year. Competition comes in the form of Dutch rival K-Forceas well as Thetis and Ulika (both Italy) and Ange Transparent of Switzerland.

ClubSwan 36: Six ClubSwan 36s will contest the Gold Cup, including ThirtySix (Italy) who had the honour of winning the class’s first ever regatta in 2019. She also proved the best performer at the forerunner for this event, the Swan Tuscany Challenge. The fleet is made up of five Italian entries – Cetilar-Vitamina, Sixth Sense, Sease, Far Star as well as Goddess (Hungary). Andrea Lacorte’s Cetilar Vitaminaand Lorenzo Mondo’s Far Star feature experienced crews who have excelled in other Swan competitions. Given the fledgling nature of this class, how competition develops will provide great intrigue.

There will be a maximum of eight races over four days. There is no discard. Competition commences at midday local time tomorrow. The event is hosted in collaboration with the Yacht Club Isole di Toscana.