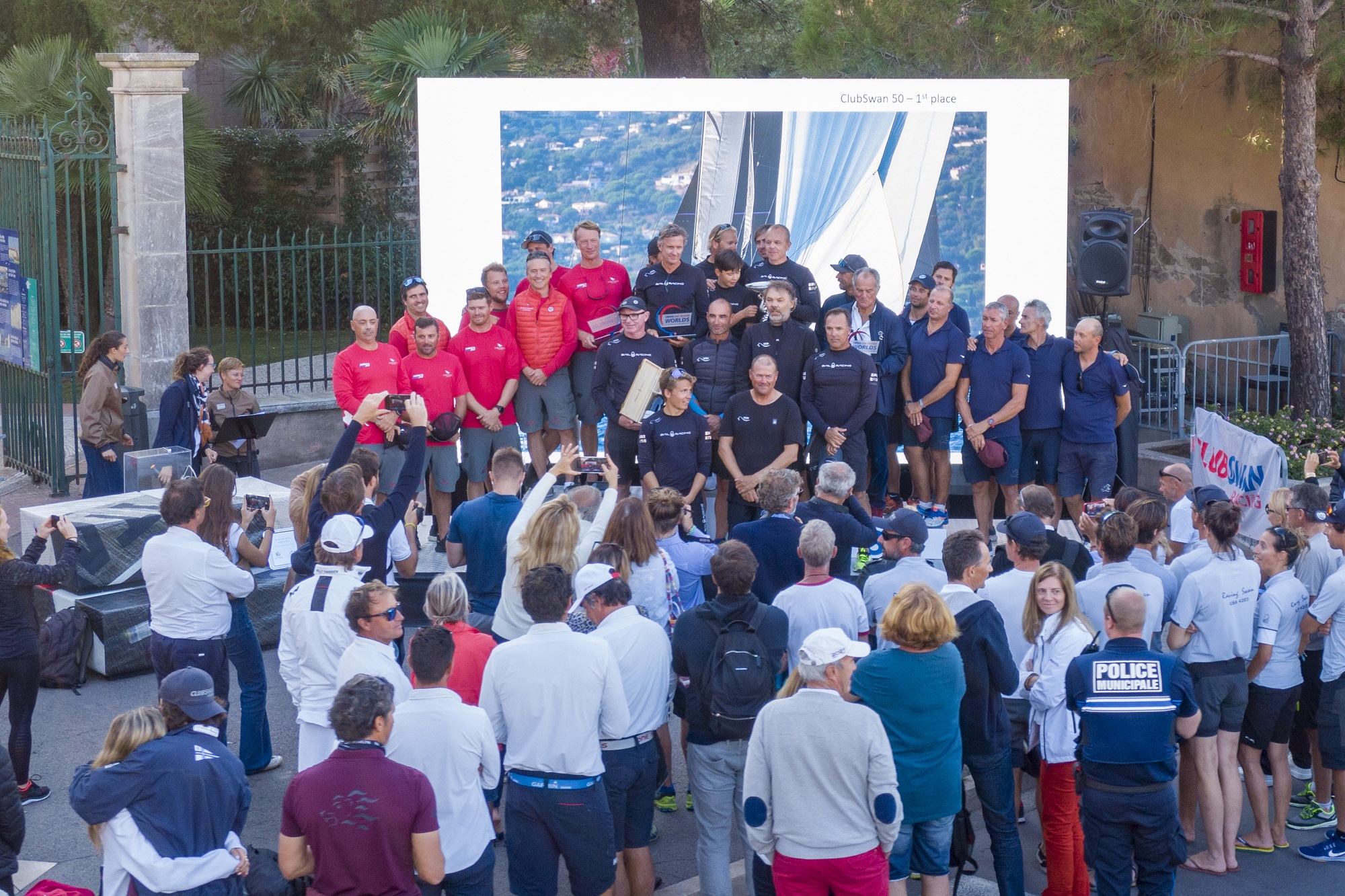 Swan has crowned its winners across the four classes of the Swan One Design Worlds after a week characterised by challenging conditions. The triumphant owners and crews have the right to consider themselves the best in the world after battling to the top of the leader board in St Tropez.

After a final day that delivered more shifty wind and allowed two races only for the two smaller classes, there were some fresh faces on the podium. Newcomer Jerome Stubler’s ClubSwan 42 Raving Swan gave a masterclass in consistent performance on his way to victory. After the day’s first race he was level-pegging with Natalia, but in second place because he hadn’t scored a bullet in the week. There was a nervous wait to hear whether a second race would be held, before a crackled message from the race committee in the affirmative.

Stubler’s voice breaks as he relates the story. “Luckily they ran a new race and then we had two boats to mark – Natalia and Spirit of Nerina. It was a tough race and my son did really well in taking the shift and marking. Really, I still feel the emotion. I’m very, very happy for the team.”

In the new ClubSwan 36 class, it was Giangiacomo Serena di Lapigio’s boat G-Spot which clung onto a commanding lead to close out the regatta. Three bullets at the start of the regatta had set them up, and excellent tactical sailing in today’s two races allowed them to fend off a late challenge from Fra Martina.

“It’s an amazing feeling,” said G-Spot tactician Michele Paoletti. “We worked really hard all the season and got a good result on the Nations League circuit. This was the last one, so it’s super good. The sailing area has been really tricky – the wind was shifting a lot. We managed the first two days really well and have also been a little bit lucky, which of course you always need.”

In truth, G-Spot has led throughout, counting just one poor finish in fickle winds on day three of the competition. Though Serena di Lapigio’s team only joined the class this season, he and his crew have huge experience from the Melges 32 and have always looked like a force to be reckoned with.

In the Swan 45 class, last year’s World Champion Motions made it two in a row. With just one race in the day for the 45s, there was an element of match racing to the duel between Lennard van Oeveren’s Motions and Argentinian Fernando Chain’s From Now On.

“It is indescribable,” said van Oeveren afterwards. “We were two points behind when we started this race because we didn’t do that well yesterday. We came onto the water with a lot of hope. We sailed our race as well as we could and finished up third and ahead of the Argentinians. We were sailing on them, looking at them, but the pressure was actually on them as soon as we were bow ahead. It was really nice to have the fight on the water.”

And despite an unaccustomed slip-up on the third day of racing, ClubSwan 50 Hatari has closed out the regatta to win a second consecutive World Championship. After a couple of false starts for the CS50 fleet, Marcus Brennecke’s boat gave an almost flawless display to finish second today and see off a stiff challenge from Earlybird and Cuordileone.

“I am very happy and very relieved, I can tell you,” said Brennecke. “Really the pressure was on because we were so close – one point separating the first three boats and then it was light wind. We got a hook on Earlybird, we went off and they had to tack away and then we tried to cover them for the rest of the race. I intended to fly out this evening but now I will stay and celebrate with the crew!”

Crews and owners brought traffic in the centre of St Tropez to a standstill as they gathered for the final prizegiving. Nautor Group CEO Giovanni Pomati paid tribute to a great venue. “We are at the end of this fantastic season. Thank you to the city of St Tropez for hosting us and giving us the opportunity to see this incredible event, which will remain in our hearts for a long time. It was a prolongation of our summer – this sunny and warm home with the autumn colours. We had to pay for that with some changing wind conditions, but that just made it even more challenging for the teams.”

ClubSwan Racing’s head of Swan sports activities, Federico Michetti, looked back on a terrific season. “I am seriously proud of what we’ve achieved – 41 races, five venues, 40 boats, 500 sailors – it’s something unique. Having the worlds in St Tropez now has been a fantastic emotion. Super tight racing with a lot of fun, family spirit – this is Swan, this is unique. But tomorrow we will start to work hard for 2022. Next season is already very close.”

Daily prizes were jointly presented by hosts the Société Nautique de St Tropez and by the town of St Tropez itself. Then the winners were awarded a beautiful piece of modern art featuring the famous red and blue swirl of ClubSwan Racing. Special thanks were also given to ClubSwan Racing’s other partners, including BMW, Rolex, Salvatore Ferragamo, Ferrari Trento, Sease, Banor, North Sails, Quantum Sails, Gottifredi & Maffioli, Garmin, B&G and Marevivo.