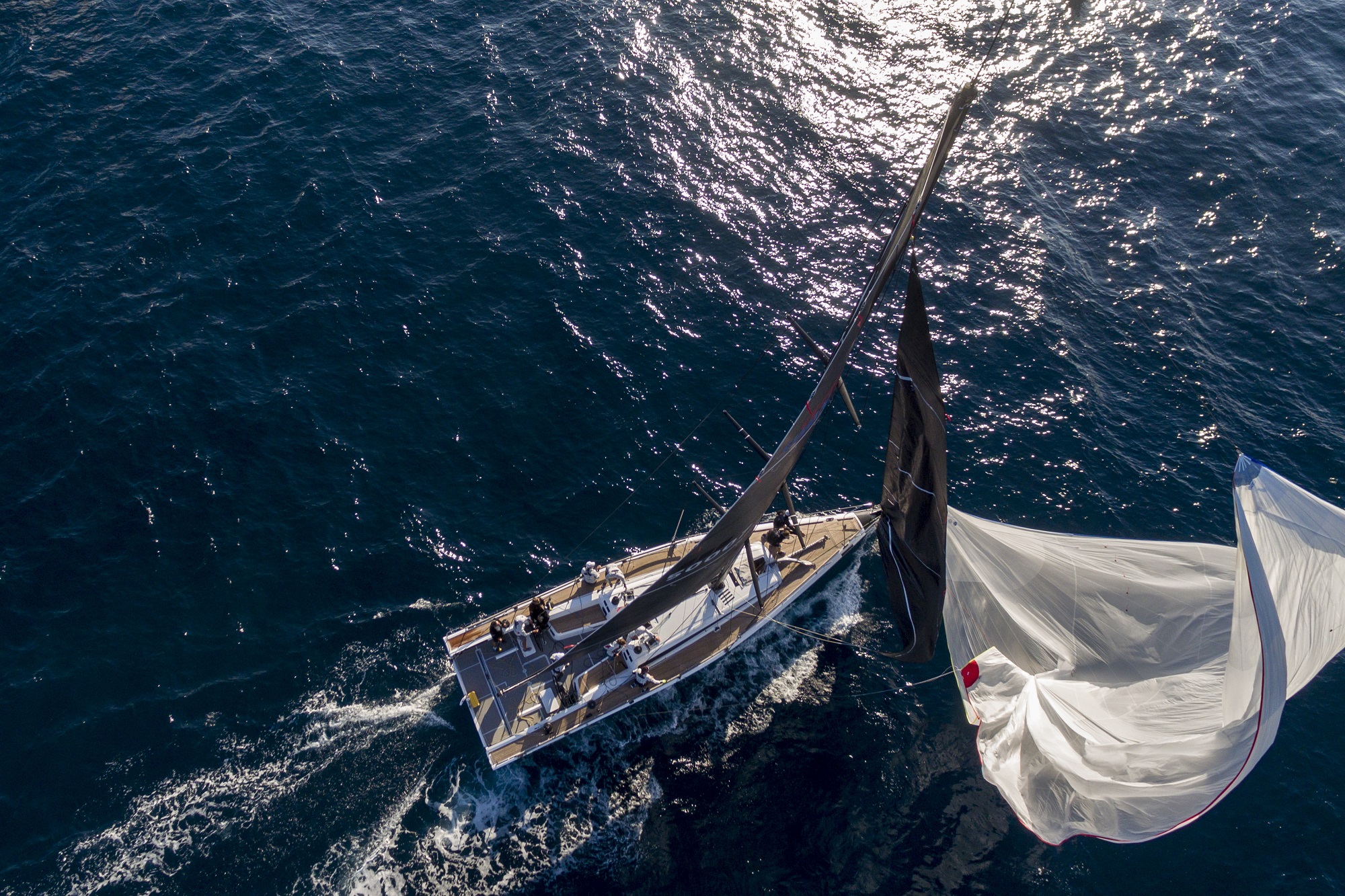 Electricity crackled along the quayside this morning as crews prepared for the first race of Swan One Design Worlds in St Tropez. After the relaxed fun of last night’s opening ceremony, tension was palpable as final checks were made and sails stowed. But the wind had other ideas and with only a breath to disturb the waters of the Gulf of St Tropez, AP was hoisted over the Capitainerie to delay the start.

When the flag finally came down around 1.30pm, teams scrambled aboard and boats flooded out of the harbour to begin pacing the startline. Being exceedingly lightly built with powerful sailplans, all four of the Swan one-design classes perform well in winds from around five knots. But it makes for tricky, technical sailing, where any mistakes are punished, and the slightest shift or gust can make or break a race.

“It has a lot to do with your mindset,” says Edoardo Ferragamo, helmsman of ClubSwan 36 ThirtySix. “You have to be very patient and the wind is very unstable – maybe some moment you have a strong gust, then five minutes later no wind at all, so that affects a lot the ranking and the positions of the race. You have to keep calm.”

He placed a respectable sixth in the 10-boat CS36 class, where the day’s only race was won by Giangiacomo Serena di Lapigio’s G-Spot – no stranger to the podium. But it was arguably a bigger victory for the Loro Piana brothers’ boat Sease, which scored a well-deserved second place after struggling for form.

“This result gives us something to be positive about,” says Franco Loro Piana. “The race was tough because of the wind switching a lot, so it was all about following the big shifts and chasing for pressure. Feeling in this type of regatta is very important – tacking when you have to.”

There are many new crews and owners here in St Tropez who are still learning the boats and their ways. But even for the old hands, like tactician Bouwe Bekking on ClubSwan 50 Balthasar, every event is a chance to do things better. “We have been maximising training in the days beforehand, getting out early while the others are still on the dock,” Bekking says. “You just try to get better and better all the time, and then afterwards, you analyse how the day has gone and make adjustments according to that and keep pushing all the time.”

Balthasar showed flashes of pace at the last event in Palma with two bullets alongside two twelfth places. But Bekking is adamant that the team are aiming for the top spot. “You always say you’re going out to win,” he insists.

But it among the CS50s, it was Hatari who won the race. “We tried to stay relaxed,” says owner Marcus Brennecke. “But then of course we discussed where to start and were lucky to be the second boat at the pin end. With a left shift it looked obviously very good, then we tacked immediately and could cross the field. That was the secret of the race and we tried to defend and play the shifts.”

Being the final event of the season, and a World Championship to boot, teams are pulling out all the stops for victory. Some boats have been saving the ‘best main’ to eke out an advantage here, while others were still tinkering with mast rake and sail trim until the boat left the quay.

“We know it is a special, unique event, so everyone will probably play a bit more riskily in this event,” says Alvaro Marinho, a top pro sailor on the CS36 Farstar, which placed eighth today. “We have achieved a bit over our expectations during this season, as we are a new team, and finished third in the end-of-season rankings. We want to keep this level in this event.”

Hopes were also high on Koyré – Spirit of Nerina, the ClubSwan 42 that is co-owned by five people. The boat performed particularly well in the Sardinia Challenge in June, with two bullets and two seconds earning a second place overall in the class. But she has struggled for form since then, missing the Nations Trophy in Palma altogether.

“Of course we are all hoping for a win,” exclaims co-owner and bow man Luca Formentini. “We have been sailing together for almost 20 years, so we are very close. The boat is fast – she is strong, reactive and very full of adrenaline. We will try our best and maybe we get one of the first three positions on the podium.”

But today, as on so many occasions this year, it was the CS42 Natalia which crossed the line first. Here again it was a story of winning the start. “It was a tricky day deciding where to start,” says tactician Federico Martin Armenanzas Quiroz. “It was shifting to the left, but the pressure was on the right, so it helped to watch the 36s. We were leading for the whole race, but we were fighting, fighting against Raving Swan who were going really fast.”

In the eight-strong Swan 45 class, it was Lennard van Oeveren’s Motions which took first place, followed by class debutants From Now On and Blue Sky. And with the prospect of stronger westerlies tomorrow, all the fleet will be relishing the opportunity to reset the scoresheet.

The day’s prizegiving was sponsored by Quantum Sails, who presented the winner with a tote bag. Thanks also go to our other partners, including BMW, Rolex, Salvatore Ferragamo, Ferrari Trento, Sease, Banor, North Sails, Gottifredi & Mattioli, Garmin, B&G and Marevivo.