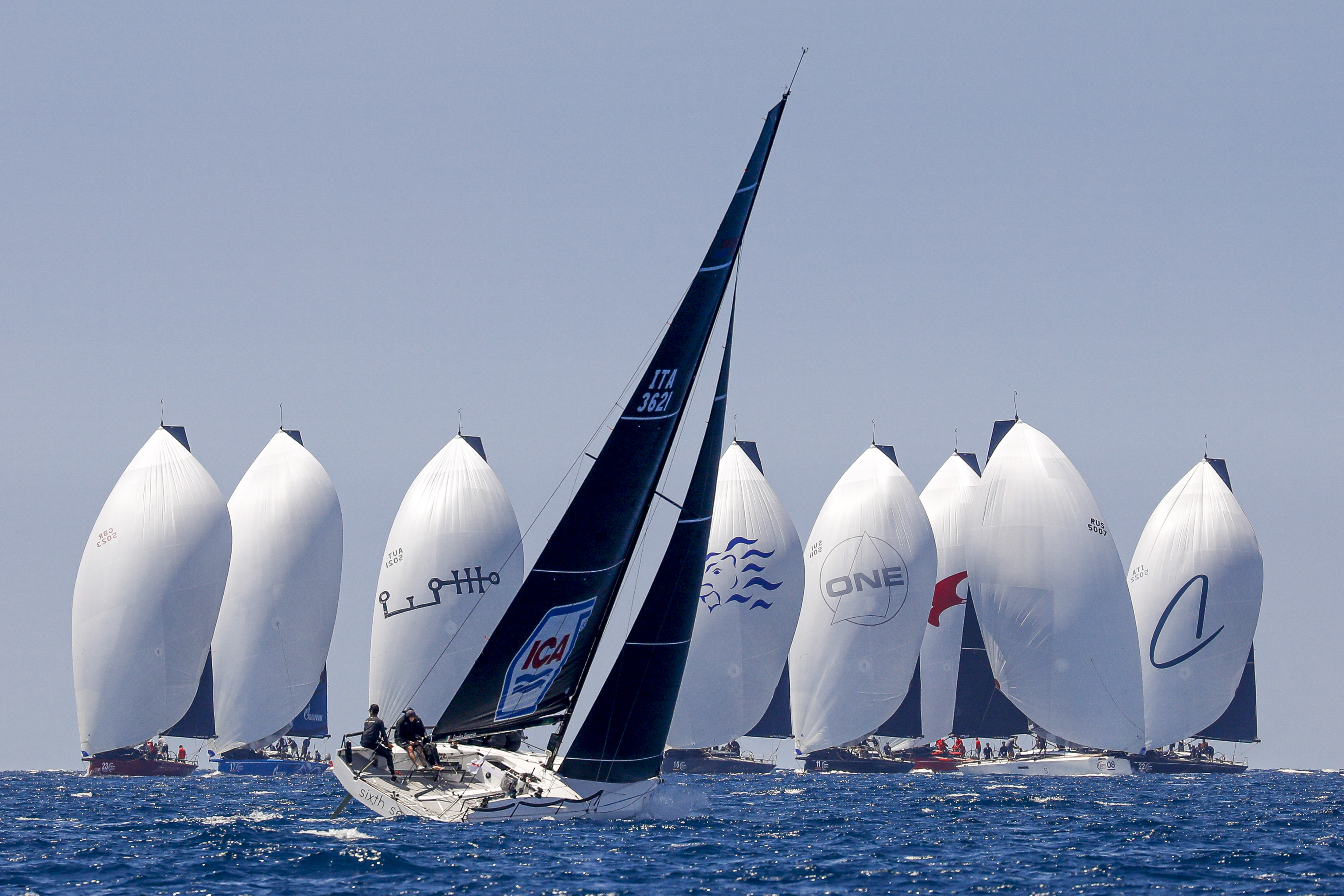 30 May Thrilling finale to close out the Swan Tuscany Challenge

The tension was palpable on the quayside this morning, as crews made their final preparations for the decisive day of one-design racing in the Swan Tuscany Challenge. After three days and nine races, the regatta rankings were still surprisingly open, especially in the newer ClubSwan 36 fleet.

In the ClubSwan 50 class, the tussle for the top spot boiled down to a duel between Marcus Brennecke’s Hatari and Leonardo Ferragamo’s Cuordileone. Third place was still up for grabs at the start of the day, which was scheduled for two races in the same calm seas and 8-10 knot breeze as the fleet has enjoyed so far.

The start proved to be the key moment of each race, and Ferragamo’s Cuordileone was faultless. “It wasn’t easy because the wind was shifting a lot – pressure too,” said tactician Manu Weiller. “We had two very good starts, managing to do what we wanted to do: stay right for the first race and left on the second.”

Leonardo Ferragamo said the key had been consistency throughout the regatta, adding: “We are very excited, happy and satisfied, because we worked hard for this result. We will have to fight very hard to maintain this position – it’s not going to be easy. There is a continuous evolution from all the teams, and this racing is really fabulous.”

After coming so close to victory, Hatari was outsailed, but not outclassed. Brennecke’s boat made two mid-order finishes to come in second overall with big smiles on their faces. “We are happy,” said Brennecke holding a well-earned beer. “Cuordileone sailed better than we did, and they deserved to win. It was very tight racing and after lockdown, it was just great to be out on the water again.”

Third place overall was taken by Stefan Heidenreich’s ONEGroup, which has posted some strong finishes throughout the regatta, including one bullet and three seconds. The team leapfrogged Ulika, which struggled to find form on the final day. “Yesterday was disappointing for us, so we knew what we had to do today,” said Heidenreich. “We had had difficulty sailing a straight line downwind, but it all came together today. We showed we can do it!”

In the ClubSwan 36 class, the podium positions came right down to the last leg of the last race, as leaders Vitamina and G-Spot were neck-and-neck on points going into it. Giangiacomo Serena di Lapigio’s boat had the better start, but one of the day’s many small windshifts suddenly favoured the other side of the course, and Vitamina were ahead by the top mark. “We made up some places downwind, but we couldn’t do enough,” said trimmer Alessandro Franci.

Andrea Lacorte, owner of Vitamina, paid tribute to his crew after the nail-biting victory. “The feeling is just one: we’re very happy about the regatta. We were consistent, with only three wins in the 11 races and I have to commend my crew – I’m very happy with them. We were all very tense before the last race, but fully concentrated on keeping G-Spot close to us.”

The day’s winner in the CS36 class was Fra Martina, who showed flashes of their early performance by posting a bullet and a second place. Along with Lorenzo Mondo’s Farstar, who took overall third place, this will be a boat to watch as the season progresses.

The overriding sense on the quay when the boats came back in today was one of delight to see the start of ClubSwan racing again. The teams are already looking forward to the second event in the Nation’s League, the Swan Sardinia Challenge from 22 to 26 June.

“It was more light wind work here in Scarlino, but that is really the best conditions to start the season. It’s challenging for all the teams because this is a new class, so every day you discover something new,” said main trimmer Giulio Desiderato on CS36 Sease.

“It’s fun, and this is how it should be,” said Polina Lyubomirova, owner of the CS50 Bronenosec. “It makes the regatta like a club of people who are into the same thing. That’s what Swan is really succeeding at.”

Bringing the four-day regatta to a close, sponsor Marina di Scarlino presented prizes to the winning teams. They were accompanied by the Livorno Naval Academy’s marching band, whose members gave a virtuoso performance that culminated in the Italian national anthem.

Nautor’s Swan revealed its long-awaited Shadow motor yacht last night during a dinner sponsored by Banor for a select group of ClubSwan owners gathered for the Swan Tuscany Challenge. The 13.2m boat was carefully positioned in the middle of the swimming pool of the Tarantella restaurant in an elegantly curated spectacle arranged by the interior designer Ioanna Marinopolous. It was unveiled as the sun set over the Marina di Scarlino.

“This is a milestone for Swan,” said Leonardo Ferragamo, Chairman of Nautor Group. “It is the first power boat in 55 years of the brand. We said to ourselves, there are so many boats in the sea – why do we need another one? But people kept enquiring. We resisted until we found something new to say in this segment, with the typical Swan DNA of performance, elegance and reliability.”

Penned by Finn Jarkko Jämsén, the Shadow exhibits the same purity of design as Swan’s famous sailing boats. And yet the stepped hull and capacity for up to 3 x 350hp outboards belie her potential for ferocious performance and silky handling.

Flexibility is the name of the game, with multiple options for the T-top and a smart stern platform that can extend the deck, provide access to the quay or to the water. The accommodation below is in timeless Nordic style, and runs to a large double cabin with bathroom and an optional crew cabin. Taken together, these features make the Shadow a capable Limousine tender, luxury dayboat or chaseboat for a larger yacht.

Speaking remotely, Giovanni Pomati, Nautor Group CEO, joined the prize ceremony from Finland. “I’m sorry not to be there, but with tests on the ClubSwan 125 and the launch of the next 98, together with the flagship Swan 120 and multiple Swan 48 and 58 hulls, I wasn’t able to be in Scarlino in person. I followed the event in spirit, though, passing one of the milestones of Nautor’s Swan’s new strategy with our entrance into the power yacht sector through the launch of the Swan Shadow. A great result was achieved by ClubSwan Racing and with the debut at sea of the Swan 58.”