Oy Nautor AB was founded in 1966 by Pekka Koskenkyla in Pietarsaari, Finland.

With hundreds of years of Finnish boat building tradition, Pekka was inspired by a vision to start producing high-quality and high performance sailing yachts, made for the those, like him, who had the passion for cruising and racing in full contact with the water and nature. This was despite the challenging environment around the small town of Pietarsaari, where temperatures can fall to -30 C in the depths of winter and the sea can be frozen for up to five months of the year.

Pekka, educated in the USA, had the intuition and the ability to convince Sparkman & Stephens – New York, one of the most acclaimed yacht designers at that time, to design his first sailing yacht in fibreglass trimmed with wood. No one before had built a vessel over 10 metres in length with this material, which was still in its infancy for shipbuilding. He had a vision that this material would dominate the production of vessels in the years to come.

The first Swan yacht produced was the Swan 36, a yacht that introduced, in addition to the fibreglass used for the hull, a significant number of innovations such as the rudder positioned fully aft, the skeg separated from the fin keel, the centre of the hull shifted back with the application of a bustle, and the swelling of the keel aft thus providing great steering stability. The result was a fibreglass vessel whose behaviour and safety equalled that of the traditional wooden vessels, that could provide greater steering stability but with less weight and better living space. It was a vessel that marked the beginning of one of the most prestigious boat yards in the world. These yachts have come to embody the ultimate luxury and quality in the sailing industry with full respect for the founder’s motto – “the very best”.

In the spring of 1968, a Swan 36 was delivered to British sailor, Dave Johnson, who skippered the yacht with remarkable success in regattas around the British Isles, and in particular at Cowes. These racing achievements generated such a positive feedback that Nautor’s Swan rapidly established its reputation as the foremost manufacturer of high performance racing yachts. This led to the development of the new Swan 37 and Swan 43, with the latter winning the Admiral’s Cup in 1969. Swan became the preferred choice of the most discerning of sailors such as Herbert von Karajan with his Swan 43 – “Helisara II”.

Sparkman & Stephens were the designers of approximately the first thousand Swan yachts sold by the Yard. These included the memorable and iconic Swan 38 and Swan 47 which, together with the other models, have positioned Swan as synonymous with performance coupled with quality and elegance, enduring reliability, and timeless lines. The unmistakable “Arrow” indented in the hull of every Swan, has eliminated the need to display the brand name. 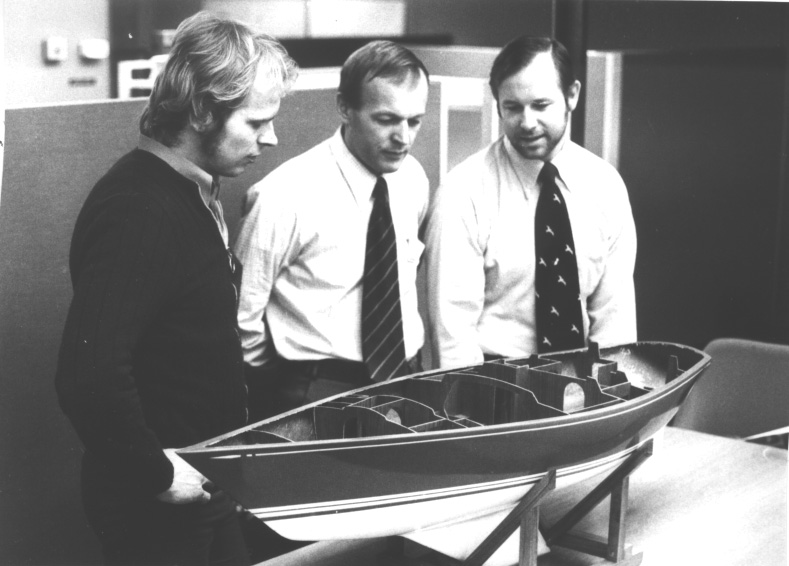 In contrast to this initial overwhelming success, fate was soon to deal a blow that would have ramifications for years to come. Shortly before Christmas in 1969, the Assembly Hall of the Nautor’s Swan boat yard burnt to the ground, destroying a dozen hulls in various stages of production. As a result, Pekka was forced to sell stakes in Nautor’s Swan to finance the rebuilding of the yard and to resume production.

Despite this setback, Nautor’s Swan continued to fulfil expectations entering the market for larger seaworthy, elegant and timeless yachts with the introduction of the Swan 55 and the Swan 65. These models offered owners all the joys of cruising combined with the opportunity for racing success – most poignantly, this included Swan 65 Sayula II’s victory in the first ever Whitbread Round the World Race in 1973/74.

Between 1978 and 1981, another very well-known yacht designer, Ron Holland, started his collaboration with Nautor’s Swan. Holland designed five boats of which approximately 300 units were produced, including the well-known Swan 37, Swan 39 and Swan 42.

In 2006, to commemorate Nautor’s 40th anniversary, Frers designed the Swan 66, a model that is the quintessence of everything that ‘Swan’ stands for. The Swan 66 was conceived using forty years’ worth of knowledge in premium yacht building and cutting edge technology.

The contribution of Frers also permitted Nautor’s Swan to enter in the “one design” racing yacht segment with the design of the Swan 45 in 2001, followed by the “Club Swan 42” in 2005 developed in association with the prestigious New York Yacht Club to encourage the return to traditional Corinthian sailing competitions and finally the Gazprom Swan 60 Class founded in 2012.

Since 1998 Leonardo Ferragamo and a group of investors have controlled and managed Nautor’s Swan. This management has evolved the brand by continuing to push forward a whirlwind of innovations and changes that firmly place the Swan yachts at the forefront of the international sailing world.

Today, Nautor’s Swan with more than 50 years of heritage, is a leader in the luxury sailing yacht market. It is globally recognised as the producer of exquisitely crafted yachts, capable of offering the perfect balance of style and performance. Swans are renowned as the most elegant and safest sailing yachts in the world. The value of Swan is in the heritage, craftsmanship, excellence and expertise, from the design process to the production, from the top quality materials to the technological innovations, from the comfort to the safety of all the yachts. 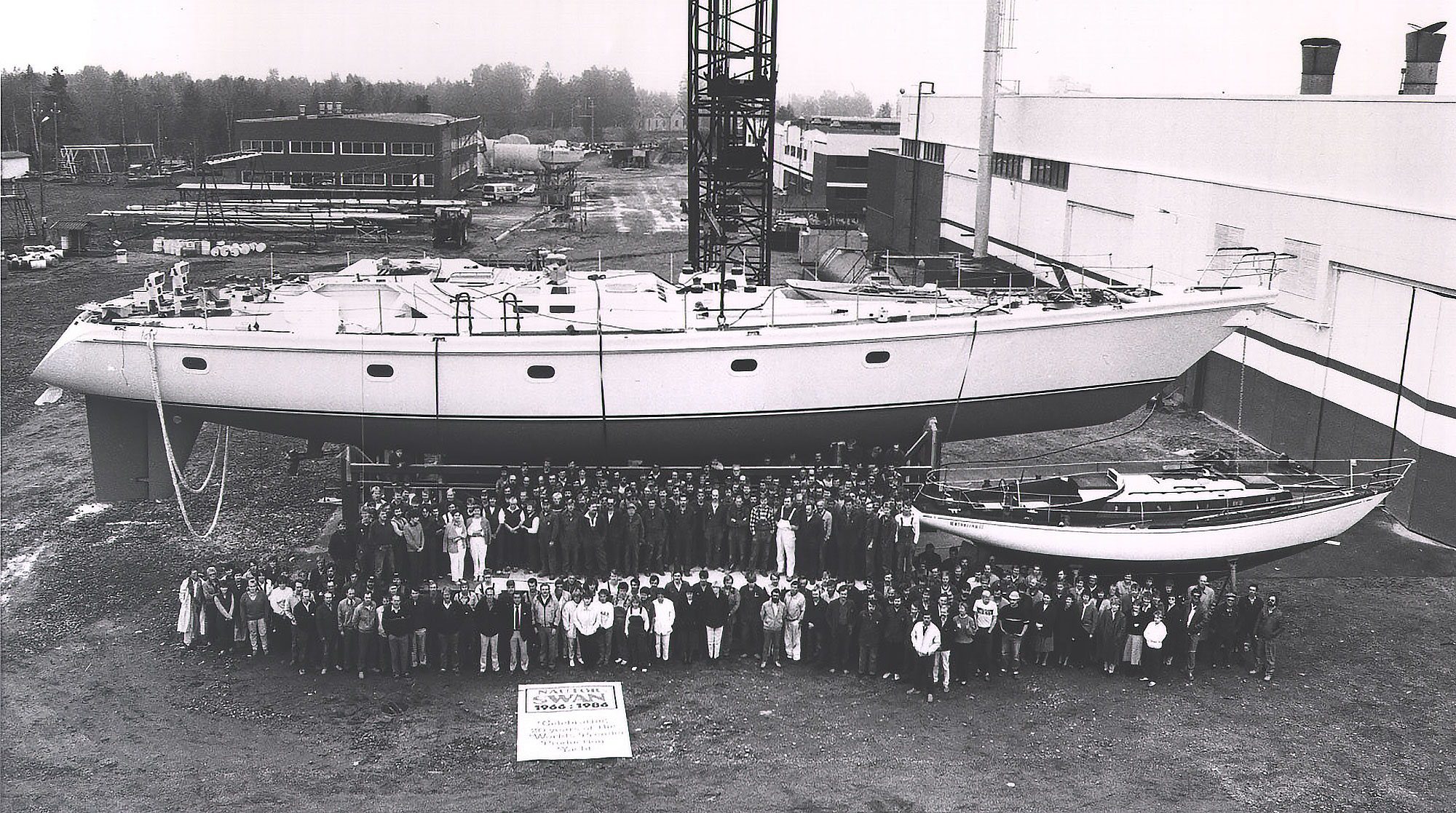 More than half a century of great achievements

In 1968, a Swan 36 achieved remarkable success in regattas in Great Britain. These achievements generated such a positive feedback that Nautor’s Swan rapidly established its reputation as the foremost manufacturer of high performance racing yachts. This led to the development of the new Swan 37 and Swan 43, with the latter winning the Admiral’s Cup in 1969. Swan became the preferred choice of the most discerning sailors such as Herbert von Karajan with his Swan 43 – “Helisara II”. 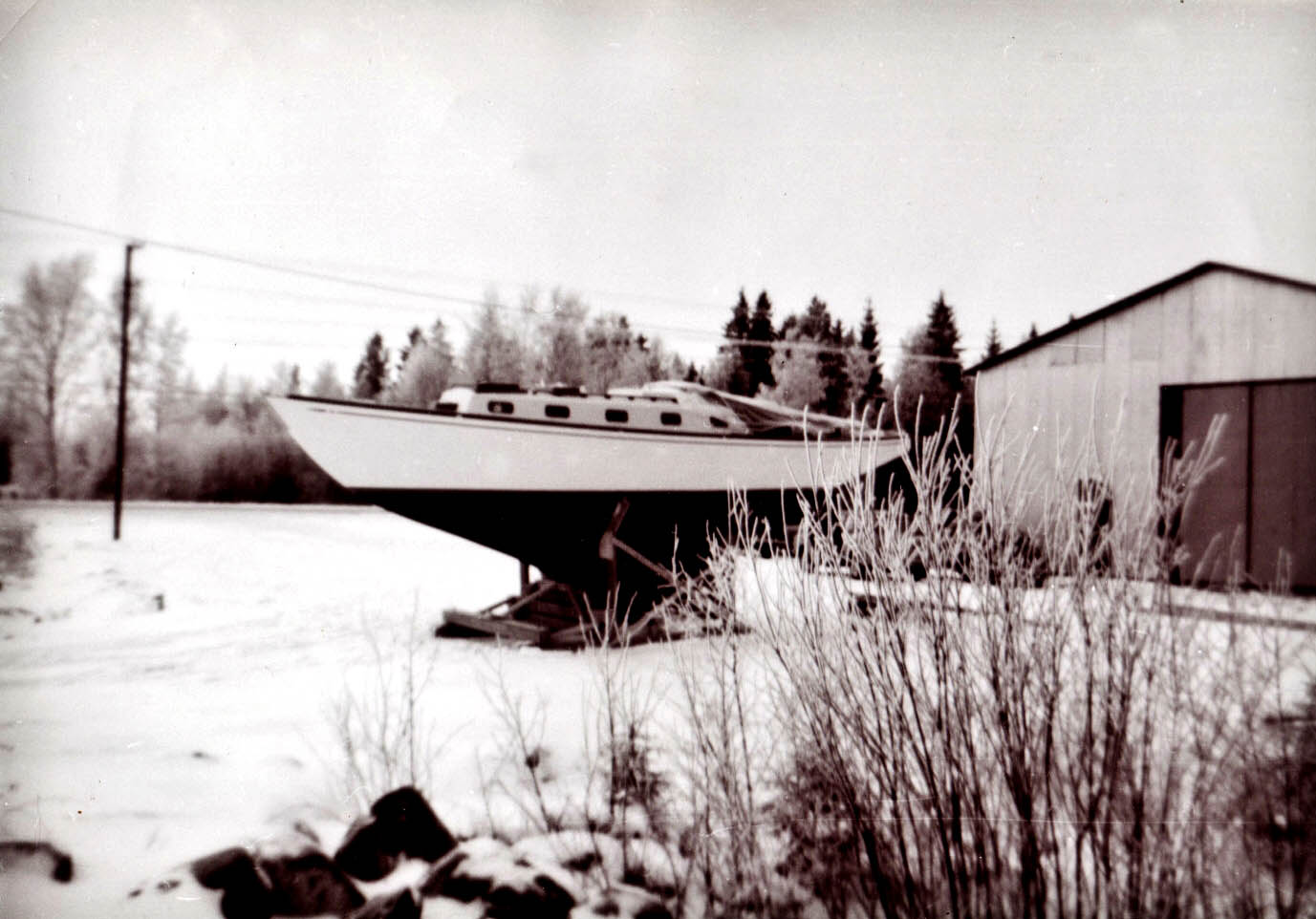 Sparkman & Stephens were the designers of approximately the first thousand Swan yachts sold by the yard. These included the memorable and iconic Swan 38 and Swan 47.

Nautor’s Swan continued to fulfil expectations entering the market for larger seaworthy, elegant and timeless yachts with the introduction of the Swan 55 and the Swan 65. These models offered owners all the joys of cruising combined with the opportunity for racing success – most poignantly, this included Swan 65 Sayula II’s victory in the first ever Whitbread Round the World Race in 1973/74.

During the 1980s, Nautor’s Swan entered a new era with the appointment of German Frers as designer, who has been responsible for the design of all Swan yachts until very recently. Over 700 yachts have been produced on Frers’ designs.

In September 2015, Nautor’s’ Swan presented the first Swan 115 at the Monaco Yacht Show. The Swan 115 was the flagship of the new generation of maxi yachts built by Nautor, now in the shipyard the first hulls of 98 and 120 are taking shape.

At the end of September 2015, Nautor’s Swan reached another milestone, unveiling the new ClubSwan 50 designed by Juan Kouyoumdjian. In 2019 this is a high-tech, aesthetically captivating one-design yacht, that will appeal to the young and competitive, while still allowing the pleasure of cruising in the true spirit of Swan, has been followed by the innovative ClubSwan 36. The ClubSwan 36 is combining, innovation and modernity with sustainable technology. She is a marriage of the finest attributes of dinghy and keelboat sailing with the thrill of the C-foil. She is the first ClubSwan one-design racer offered with an emission-free electric drive and lithium batteries with technology by BMW i.

Nautor’s Swan has valuable and unmatched experience in designing and managing one-design fleets, having launched the Swan 45 fifteen years ago, followed by the successful Club Swan 42, Swan 601 and Swan 60.

With a state-of-the-art facility based in Pietarsaari, a Global Service with 5 hubs in the Med and 19 service points, the divisions ClubSwan Racing, Brokerage and Charter, Nautor is a brand round 360°.

More than 2,300 yachts have been built over 5 decades between 36 and 131 feet. The range is divided into 4 different lines: ClubSwan, Swan Yachts and Maxi Swan, and Swan Shadow, the first motor yacht by Swan.

Jewels in the crown of the ClubSwan Racing calendar are the Rolex Swan Cup, organised by the Yacht Club Costa Smeralda (Porto Cervo), and the Nations Trophy, dedicated to the Swan One Design yachts (ClubSwan 36, ClubSwan 50, Swan 45, ClubSwan 42).

Since 1998 Leonardo Ferragamo is leading and managing Nautor’s Swan. This leadership has evolved the brand by continuing to push forward a whirlwind of innovations and changes that firmly place Swan Yachts at the forefront of the international sailing world.